A medium-size US MedTech company was running a phase-3 trial for a non-invasive surgey in COPD patients in Europe. Recruitment via the sites was severely delayed and the sponsor approached Mondosano for help in patient recruitment in Germany. The study was conducted at 8 sites in Germany.

The study was looking for patients with moderate and severe cases of COPD and no serious comorbidities. As the study was dealing with a non-invasive surgery as opposed to taking medication, the interest of patients to participate was less than for other trials. In addition, the patients did not receive any allowance other than transportation cost reimbursement from the sponsor.

Mondosano created informational material about COPD in general and articles on current therapies to inform patients beforehand and create interest in the topic of study participation and reduce hesitance regarding the procedure. We also worked with partners such as advocacy groups and mail order pharmacies to increase the potential target group. We used a broad channel mix of online media to reach the target population and algorithms to create and optimize the recruitment process.

The recruitment activities brought qualified and motivated patients directly to sites, which resulted in a reduction of site burden. The two-phase screening process (online & telephone) secured a high quality of patients that came informed and committed, which resulted in low no-show rates, to the sites. Because of the existing database of Mondosano patients with COPD, we also managed to refer 26% directly from our database. Mondosano managed to recruit 21 patients in only 4 months. 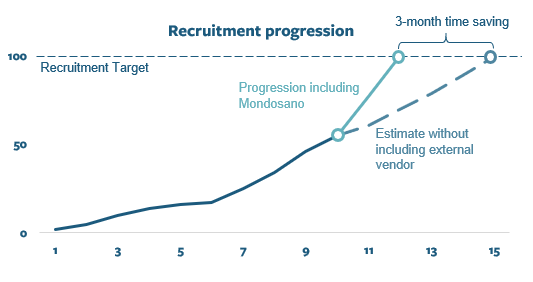 Stay up to date with patient recruitment, patient engagement, patient centricity and all things digital health with our free newsletter.